Slowly Moving Back To Normal

My grandsons left Friday morning and other than changing the beds, washing the sheets, and going fabric shopping, it took me until Monday afternoon to get back to work - namely mowing the lawn. I'm so glad that I'm old enough to realize when I need to rest rather than force myself to do the work, especially as work is never ending. Those repeat tasks never go away and if we don't manage them, they will manage us. 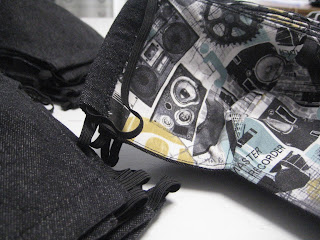 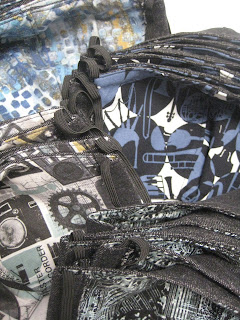 The only sewing I got done while the boys were here was to make some more masks for my husband in a different style with a wire over the nose. Not that I need to tell my story but I can imagine there is some confusion in my writing about both living alone and being married... for thirty-nine years. My husband lives and works just over an hour away. His job is in an essential service so he hasn't been coming on weekends because he doesn't want me to get sick. The long and the short of it is that I have always wanted to live in a small creative community and after years of trying to discuss moving together, I gave up. It felt like I was stagnating in limbo waiting for someday. This is my one and only life too and since he had no idea when or if he would ever be willing to retire or move and I was tired of waiting, I moved. And it's been a good decision. We've found a way to make it work and I am thriving again which is so important. 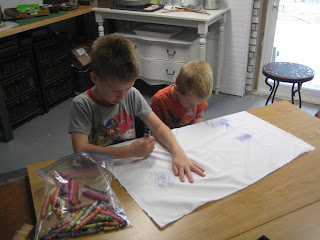 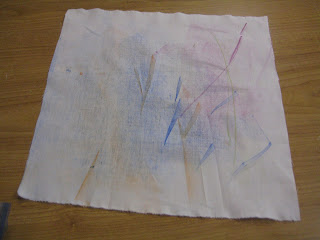 The boys and I spent one day colouring fabric in the studio. They are using regular crayons on prepared for dying cotton fabric. I took a workshop on this technique years and years ago and haven't used it much since but it definitely re-intrigued me. They created some fabric for Christmas gifts for their parents that I'll sew and wrap for them so there is a gift to give and an element of surprise. As silly as it might sound to some, I've been Christmas shopping because I think we're going to be locked down again and I want to have that all organized and taken care of and just relax. I've also been stocking up for fall projects both in the studio and around the house. Just in case. 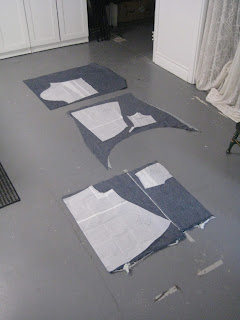 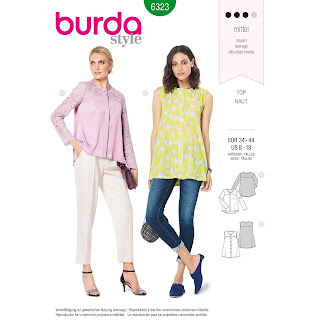 In the summer, I find it hard to maintain my daily routine of coffee and then an hour in the studio. Usually that's because of the weather and wanting to get to the yard work before it gets too hot. Only whenever I miss the morning hour for days on end, I become both emotionally and physically tired because that definite hour a day energizes me. It's a daily vitamin. SO... I've been making an effort to take my morning time no matter what and started another version of the Burda 6323 top using some denim remnants. First, I had to figure out if I had enough larger pieces for the pattern. 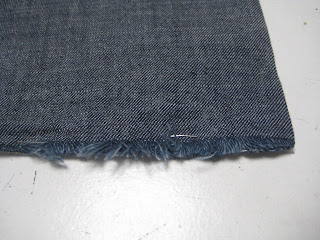 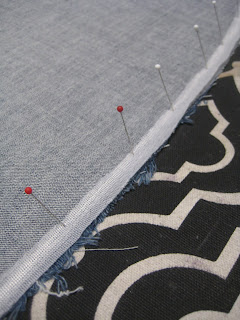 In one spot on the lower back, the hemline was frayed. Since I normally fuse a strip of interfacing along this edge to help it finish and turn nicely, I was able to incorporate the fray into the interfaced portion and it will be okay. Right now, I'm painting the yoke. I'll talk more about that later.

Things are slowly getting back to normal... sort of. Cleaning up has led to a major cleaning out since - at the same time - I am having the closet in the basement suite made larger by extending it into my storage space which means shifting that stuff while the work is being done. Cleaning and shifting has, somehow but not surprisingly, led to the urge to purge which typically happens several times a year. Right now, I'm going through everything in the entire house with a minimalist, less is more, approach. I prefer to not keep things that I don't use and instead take them to the thrift store so someone else can use them. It always makes me feel lighter with more energy and it increases the potential and flow in my studio. YES YES.