My two grandsons arrived a week ago Saturday and are here until Friday morning - as in almost two weeks with Grandma, just the three of us, no parents. My youngest son is now twenty-six so those days are long gone and I have nothing but admiration for stay-at-home Moms. It's the hardest job ever. AND... I have tremendous admiration for my younger self who raised three kids, often alone while my husband traveled, and they turned out pretty good if I don't say so myself. I not only love them, I like them. 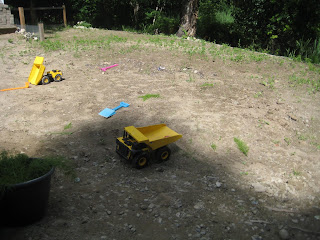 My boys used to play in the back yard with Tonka trucks. I found these two at the thrift shop on my one and only road trip a few weeks ago. What a bonus to find two, not just one, no arguments. 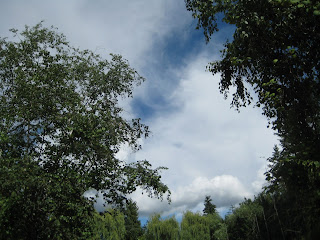 My youngest grandson took this picture. He was randomly shooting images however, blue sky and sun has been significantly missing so far this summer so it was definitely worth celebrating. 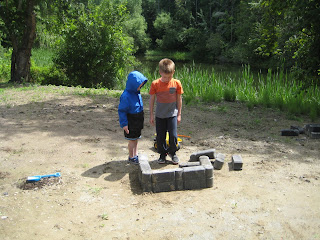 The boys used a pile of bricks to construct a fort in the back yard. I had waited on leveling the yard and putting in grass until after their visit so they could enjoy a HUGE sandbox. They love that and they are enjoying playing with the neighborhood kids since they live in more of a hot spot and have been self-isolated since mid March other than for a trip to their other grandparents. Boys need to play outside. This is good. 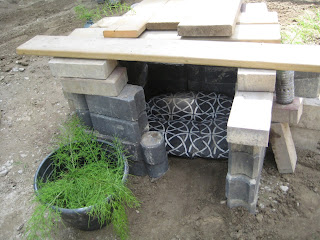 This fort is version one - bricks, dirt, wood, an outdoor cushion, and some plants to decorate. While they were building this I was... 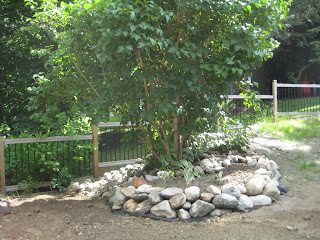 ... placing rocks around another back garden bed. It's the first yard work I've done in weeks. Although, it felt good to get something done, I'm nowhere near finished the list of backyard chores I had hoped to accomplish while they were playing. Apparently, I am not that girl anymore. Instead... 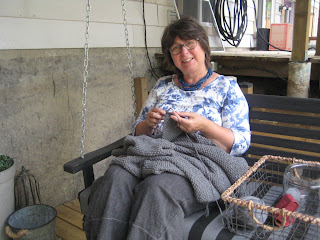 ... yesterday, while they were building version two of the fort, I knit some more of the throw for my swing... while sitting on my swing... which is the first time since I hung it at the beginning of June that I've been able to actually sit and enjoy it. YES YES. The boys like it too although they don't understand the swinging like a rocking chair style as opposed to the swinging like in the park style. It's good to have them. We're having fun. And I am one exhausted Grandma.

Email ThisBlogThis!Share to TwitterShare to FacebookShare to Pinterest
Labels: About Myrna, Yard