The plan was to cement some posts and begin working on the stairs between the back levels. This will not be happening. Pouring cement in a rainstorm is not recommended so I took my work clothes off, changed my plans, and I'll be in the studio today.

This past week has been really hard. All of the events planned for this year have been cancelled and there's absolutely no idea when they may happen again. The one on-line class I was really looking forward to was a huge disappointment and the one I really want to take next is not being offered until the fall. The news is all  about the inevitable second Covid wave and it's discouraging to realize that as wonderful as my home and studio are, I may be "stuck" here for the whole year. Obviously, that calls for an attitude adjustment and...

... since I have a strong urge to go somewhere, buy something, and it's supposed to storm (maybe) tomorrow, I'm planning a road trip forty-five minutes away to visit Fabricland and Value Village... with a list... for fall projects and for outside toys for my grandsons who, along with my daughter and son-in-law, are coming to visit this weekend. I am looking forward to seeing them and the hugs and snuggles especially as I have a feeling this may be our only visit this year. What strange times. 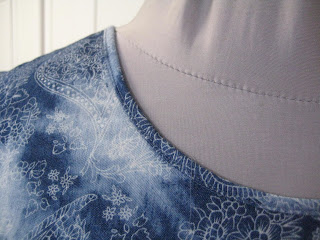 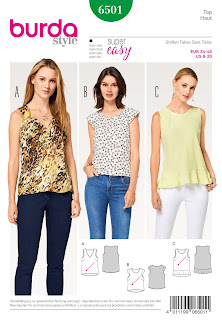 With the remnants from my last project, I wanted to make another Burda 6501 sleeveless top. I was concerned about fitting the pattern pieces on the fabric with the blotching strategically placed and delighted when it was super easy. Until I realized that I'd cut it out on the straight of grain and it's supposed to be cut on the bias. This was only one of a long list of oops lately. A lot of rookie mistakes. And I'm not sure why. 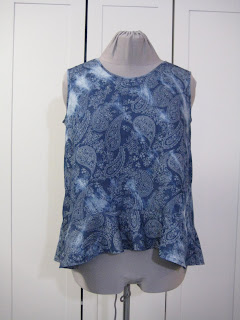 The first time I sewed this pattern, it felt a little snug in the shoulders. And it was. It seems that I had adjusted the shoulder width to the wrong measurement thinking mine were 14" in front and 14 1/2" in back when they are really 14 1/2" in front and 15" in back. I'm not sure how I suddenly starting using different measurements but I used them on the last project as well so that delightful blouse with the fun collar is tight in the shoulders. It may go in my old lady clothing box as well with the too tight, wrong size pattern, pants from before that. 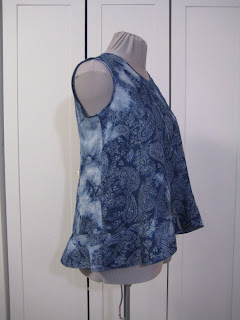 Although it wasn't cut on the bias, the blouse was still going to fit so I went ahead and finished it, put it on the mannequin, looked at it, and wondered why it was so short. Duh. I hadn't cut out or sewn on the peplum. I can't say where my brain was. I still don't know but it's welcome to come back home. Luckily, there was enough fabric left to finish the blouse properly - remove the first hem, add the peplum, and hem it again. 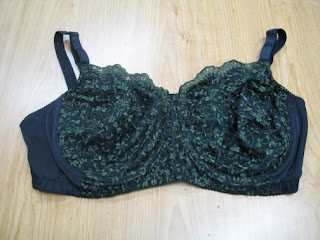 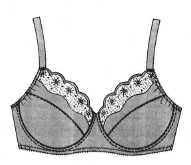 Last week, while my friend was visiting, I started working on a bra. This is NOT it. This is simply proof that at one time I did know how to sew bras and well. Although it had been a while, I thought I still remembered how to put the parts together. I didn't. It was a comedy of errors ending up with the sides sewn together in the middle and a very tiny distance between bust points. For the first time in a long time, that project ended up in a ball in the garbage. I will try again. Sometime soon. When my ego is less fragile. 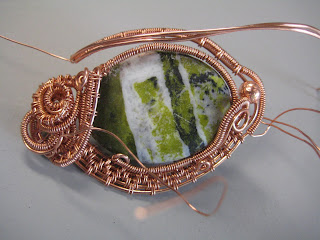 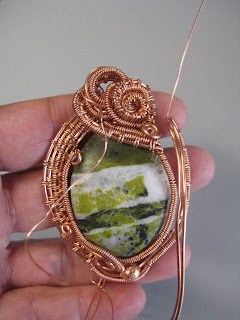 Wire weaving seemed like a safe option but no... I've made some oops there as well. Sometimes, I think it's fabulous that I just pick up the wires and start and see where it leads and learn as I go along by problem solving the technique and the design. Other times, when it's not flowing well, I wonder why I don't just follow some step-by-step pattern only it's not me. I like that journey of the unknown which is why... 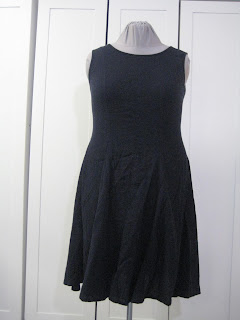 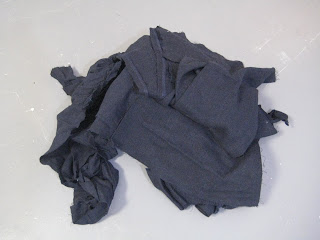 ... my next project is to refashion this blue linen dress, originally sewn about eight years ago, already shortened once, with a pile of scraps to play with. I'm not wearing it, it's "ugly", and there's no where to go but up. YES YES!

Grateful - attitudes can be adjusted, the power of thought
at June 23, 2020