This week, I've taken a break from the yard and have been moving slow and working in the studio. I'm a huge believer in celebration and especially in celebrating our birth day. Mine was on the 3rd and I'm happy to have turned a year older - 58 - since the opposite of older is dead and no, I'm nowhere ready for that. There's so much left to explore.

I started taking my birth day off work when I was 18 and worked for a company where part of our union contract was to have our birthday off. In my thirties, I met an artist who every year on her birthday made a doll to commemorate the previous year. The habit intrigued me and while I didn't want to make a doll, I did start doing something special either taking a workshop, going on a trip, or planning an event - something to mark the day.

Since this is an unusual year and I couldn't go away, I retreated at home and it's been different and still good. I talked to family and friends on the phone, sewed, ate lemon shortcake, and went out for dinner with a friend at one of the few restaurants in town with an open dining room. We both really enjoyed it. The day was almost perfect except... 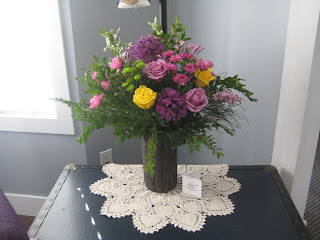 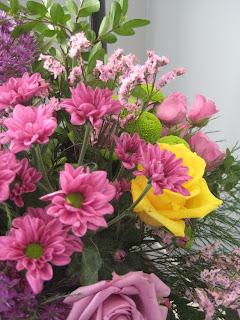 ... my grandsons didn't call. They are visiting their other grandparents and won't be home until Saturday and will call me then. Sigh. Sharing is such hard work when it comes to warm, snugly beings. I adore them. They all - my daughter, son-in-law, and the boys - sent me this beautiful bouquet of flowers through an online order that happened to go to a florist shop owned by a friend. The instructions were to make something colourful and fun and she went above and beyond with her embellishments. As my daughter said, that's beautiful and it's not what I ordered. There are six large roses, twelve small ones, four kinds of greenery, purple and pink flowers that I don't recognize, and a vase that looks like wood. That trunk is four feet wide to give you an idea of the size. I believe that...

... what goes around, comes around and there have been times when I'd wonder what kind of a bag had I been that all this negative, difficult, horrible, terrible, frustrating stuff was coming my way. And then I realized that kindness goes out in one form and comes back in another and not necessarily kind for kind. This bouquet says a lot about how my friend feels about how I make her feel. It's a good legacy. 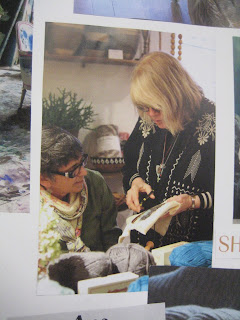 When I make my yearly collage, I don't always know what each picture means or I think I know and then as time goes on, the true meaning becomes clearer. During my journal time on Wednesday morning, I realized this image is NOT about teaching. It is about sharing. There's a subtle difference that is calmer and more peaceful, more about letting things unfold rather than making them come about. Flow rather than strive. It's good. 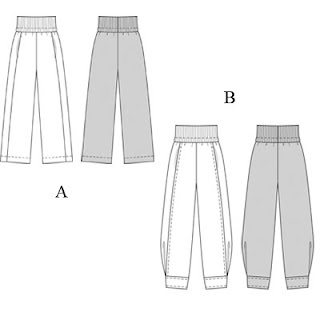 Wednesday was my birthday so not only was I reflecting on the year ahead, I spent the day having fun my way. I sewed my favourite pant pattern, Burda 7400, view B. I first sewed this pattern in 2013 and have no idea how many times I've sewn it since. It fits me beautifully and flatters my figure. The only thing I changed was the waistband substituting an elastic casing for the original ribbing. 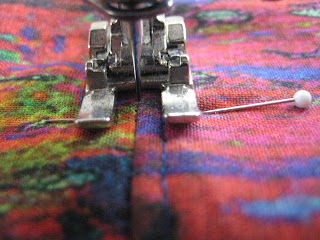 Of course, I changed some of the sewing steps including stitching in the ditch to attach the facing of the cuff to the bottom of the pant leg. Buttons, zippers, and stitching in the ditch are three techniques I avoided for a long time, even hiring them out at one point, until I realized the only way to have more creative freedom was to learn the thing I feared. After all, it's just fabric and not world peace. And - as usual - the more I did what I wanted to do the better I got at doing it. We learn to do by doing. 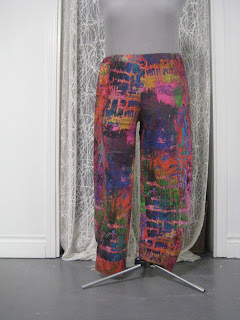 I finished the pants on Wednesday and they were almost perfect. Sewing went smoothly, the seams pressed crisply, the fabric behaved, and the parts came together with ease right up until the moment I tried them on... and they were skin tight. I'd noted on the smaller size that I made a clean copy in December 2019... which I did... but of the wrong size because that's not the one I sewed then and thought I was sewing again. I tucked the smaller pair in my Alternate Sizes box for some day in the future when I'm smaller and frailer and don't want my kids to buy my clothes and then on Thursday, I sewed another pair in the correct size and they are FABULOUS.

The fabric is cotton quilt batting that I bought at a Fabricland in Calgary while shopping with a friend last year. It's super wide and was significantly reduced in price, below five dollars a meter, so I bought three meters and had more than enough for the second pair of pants and still some left over plus all the scraps. 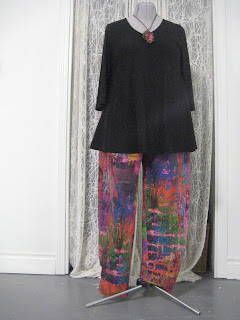 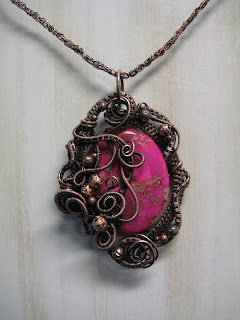 The pants fit into what I describe as my uniform - a funky bottom garment, a plain and usually black upper garment, and a statement necklace. The t-shirt was sewn earlier this year and the necklace is a wire woven pendant with a pink jasper stone that I made several years ago for the outfit I wore to my brother's wedding. 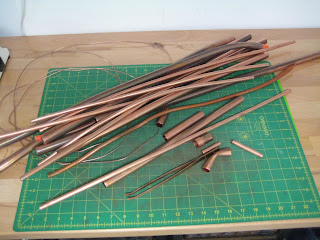 Last Friday, I had the air conditioner moved from the back of the house to the side of the house which turned out to be both a better position aesthetically and mechanically. Apparently, an air conditioner is supposed to sit higher than the furnace and this one wasn't. I'm not sure why the previous owner did that but it's moved now and in the process there was all this extra copper. The workmen were totally thrilled when they saw my metalworking bench and realized I truly did want it. They started saving ever little bit including the ground wires. YES YES. That's months of work and only a small part of my metal stash. Isn't a stash a wonderful thing? I've worked off mine for the past months of quarantine and have barely touched it fabric or jewelry wise. I have lots of potential. 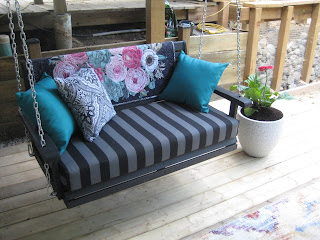 The weather this week has been mixed and windy. When it wasn't raining water, it was raining pollen so I haven't finished decorating my deck but I did hang the porch swing and put out the cushions and throw. The single flower is a Gerber, one of my favourites. After I finish the edge of the wall behind the swing, I will fill that garden with Hosta. There are several ready to be split and moved. Aren't perennials amazing? Free plants. So fun.

Grateful - for so many friends and family celebrating my birthday with me.
at June 05, 2020