Shortly before all the stores closed, I found a pair of Oska pants at a local consignment shop. They are a linen/wool blend and a check print... not that any of that matters because I was most interested in copying the pattern. The design is composed of the front and back, a side panel, a cuff, and the waistband with a fly front. As usual, I planned to eliminated the fly front and use a sew on waistband with 1" elastic. To begin... 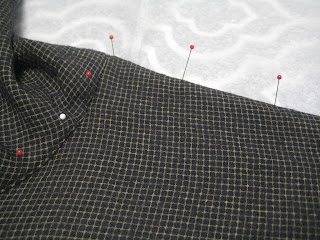 ... tracing the pattern, I start by folding along one seam line and then pinning along the rest of the seam lines working through the garment piece by piece. Above, this is the back piece. I folded along the inseam and pinned along the crotch seam as well as the seam connecting the back to the side panel. 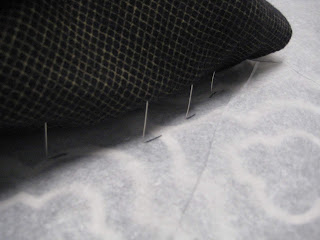 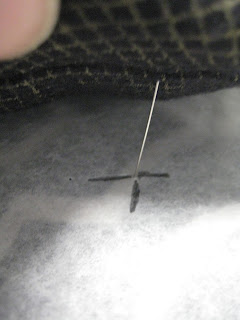 Because, I have a pin-able surface, I can pin through the seam line and the tracing paper into the surface and then make a mark at each pin. When the pin is the intersection of two seams, I draw a line on each side. 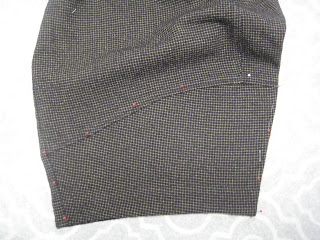 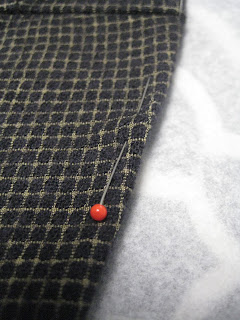 Some pieces can't be laid flat such as the cuff. Above left, I laid one side flat so that I could see the side seam, the top seam, and the hem. I pinned the fold so that when I flipped it over to trace the other side, I could match the fold up correctly again. Below, the dotted line ... 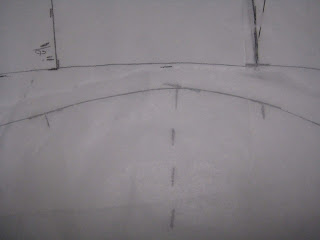 ... marks that fold. The cuff seam matches up to a dart and a seam. Both of those are marked with notches along the cuff pattern. The dart is 1/2" wide folded at the seam line which means that when I draft it, it will need to be 1" wide and tapered to the point. The line of the dart was traced in exactly the same manner and I drew at dot at the end. 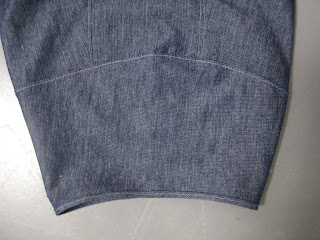 Here is how that same section looks in the finished garment. You can see the same curve where the dotted line was and to the left the dart and to the right the seam. 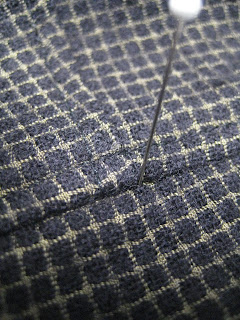 This pin indicates the point where the dart intersected with the cuff. As I mark underneath, I draw a line into the cuff indicating this needs to be a "notch" on my pattern. 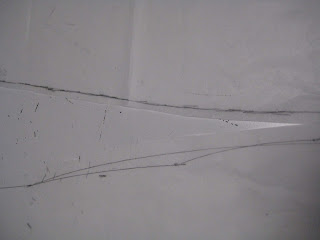 After all the sections have been marked out, I connect the dots to get the rough shape of each garment piece and then starting with the longest one - in this case the side panel - I begin to draw the shape using a ruler and a French curve to get the smooth lines needed. Most of the marks line up but some will be way off depending on how the sections were pulled and pinned. I know what the shape of a pant pattern looks like so I can use that information to correct wobbly lines. I also know that the two seams need to mirror each other in order to be pinned right sides together. 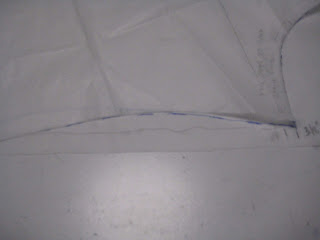 Next, I use my templates (which I'll talk about in another post some time) to trace the lines that work for my shape and were developed in previous patterns. Above is the shape of the back inseam. And then... 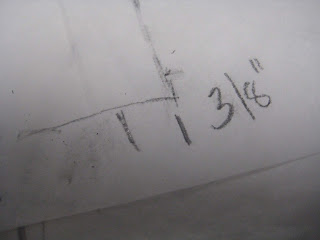 ... I walk all the seams, one at a time, and note any differences. The front inseam was 3/8" longer than the back inseam. For each issue, I figure out the correction and adjust the pattern. When all the adjustments have been made, I walk the seams again. Walking the seams in the same order that the garment will be sewn together and making sure that they all line up correctly saves a tremendous amount of stress down the line. If it doesn't work with paper, it's not going to work with fabric. 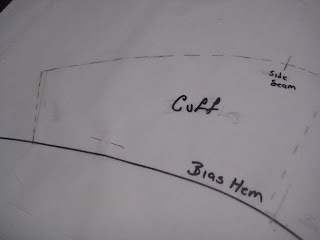 Next, I begin adding the seam allowance and marking the cutting line with a black felt pen - again using a ruler and a French curve. I start with the lines that will not change such as the bias hem and then... 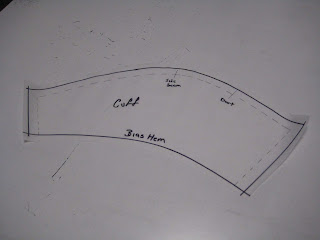 ... draw out the distance of the seam allowance to get the cutting edge of the pattern piece. From there, I determine where the grain line will be. Above, the cuff is meant to hang parallel to the floor so I folded the hem edges together, creased the fold, and drew the grain line there. Again, I use what I know about patterns and fashion from previous experience. 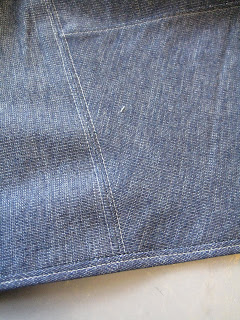 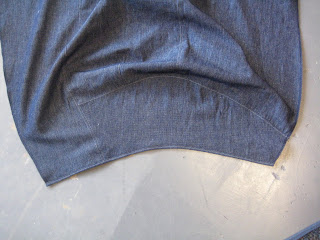 When I walked the seam between the back piece and the side panel, I found that I had not added a seam allowance at the bottom of the side panel and it was 5/8" too short. Instead, I had accidentally marked it as the bias hem. This was the third time I had walked that seam and if I had assumed that I was correct, there would have been an issue. SO... what I'm trying to say is... walk the seams, walk the seams, and walk them again. I used the same bias hem talked about in a previous post. 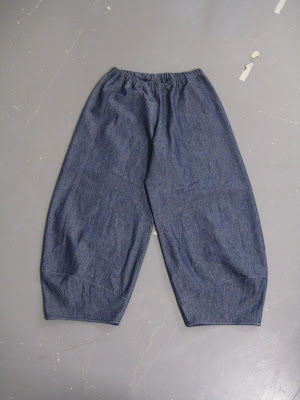 And here is the finished front. I would have put them on my mannequin but she doesn't have the right shimmy to get the smaller waist over her wider hips and I wasn't willing to fight with her to get them on. It's like trying to dress a slippery toddler fresh out of the bath.

This style of pan,t with multiple seams and a belled shape, is one of my favourites. It helps to hid the disfigurement of my right hip and balances out my bottom heavy shape. I like the architectural look of the seam lines and highlighting them with topstitching.

For topstitching, I typically use a low to medium contrast thread colour because I like the punch in my outfit to come from a statement necklace and because I have a minimal wardrobe. I don't want to make a garment less useful by using a high contrast colour or one that only goes with some garments but not many - say hot pink. In this case, I used grey on denim blue and that works for me.

For the past four summers, I have spent long days - 10-14 hours - working in my yard trying to get it into shape from the neglect of the previous owners. By the end of the summer, I've been exhausted and out of balance. This is not the year for exhaustion and a lack of balance - not that any year is really but - so I had decided to only work in the yard on weekends but yesterday, I realized it would be more beneficial physically to spend a couple hours every morning instead of tiring myself out on the weekend.

On Friday, I cleaned up all the construction garbage from last fall. On Saturday, I stacked all the wood "remnants" and created my own lumber yard so I know what I have. On Sunday and Monday, I spent two hours each morning moving dirt and made quite a bit or progress. I'll post some before and after pictures when I reach the next stage.

Grateful - understanding how to draft a pattern
at April 14, 2020