That's When It Turned The Ugly Corner

One of the things I am missing right now is snoop shopping. I love to meander through thrift and consignment stores looking for potential because - as you know by the title of this blog - I am addicted to potential. While Pinterest is inspirational, it's not the same. You can't find something, pick it up, turn it over, and imagine what it could become however... 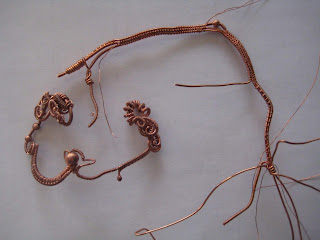 ... and luckily for me... I can do that with the garbage on my counter. These scraps were cut out of two projects going nowhere and I evolved them into... 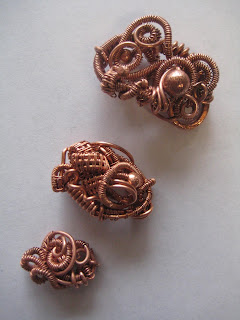 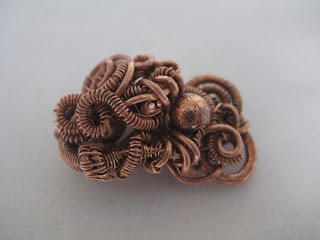 ... these three pieces shown at left. The smaller one has been put aside for now. I think it may become a ring. The larger two were combined into the piece at right that I then... 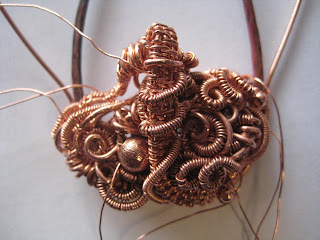 ... started adding more wires to attempting to create a drop pendant. This is where the piece hit the ugly point and stayed for quite a while as I made every effort to avoid the drastic surgery that was needed. Eventually, I cut out that lump at center top that just wasn't co-operating and that's when it turned the ugly corner and headed back to better. I folded the wires around and below before adding more elements to create... 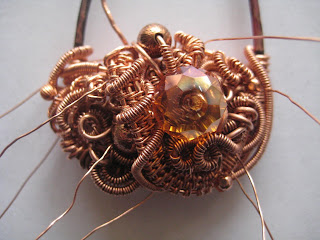 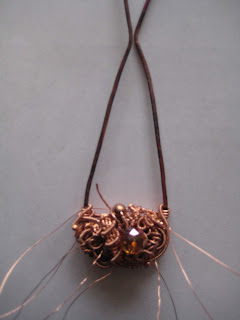 ... this focal. It is set into a thicker gauge of wire that forms the tear drop pendant. The bead is only sitting in place being auditioned in this image at right. I stitched it in later after the patina was added and the piece was tumbled to work harden. 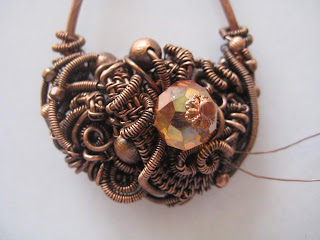 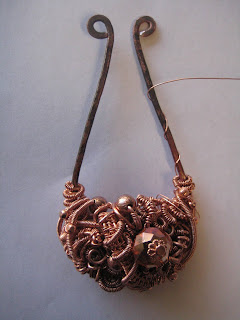 Originally, I left a couple wires to stitch in additional beads but once the patina was added, I didn't think they were necessary and instead secured and trimmed them out. The two curves will hang at throat level with the pendant sitting higher on the chest. This is the stage it is at right now. 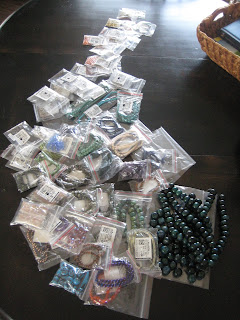 Fire Mountain Gems was having a significant bead sale the last time I visited so along with the findings I needed, I stocked up on a variety of beads. Beads are not like paint; they are like thread. I cannot mix the colour I want and need to buy it. I'm trying to acquire a variety of sizes, shapes, materials, and colours but it will take a long time to create a diverse stash. Luckily, these excellent prices helped me take a big step forward. 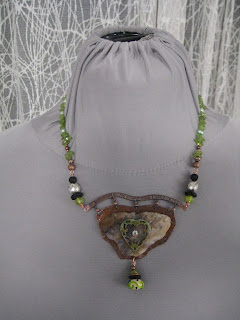 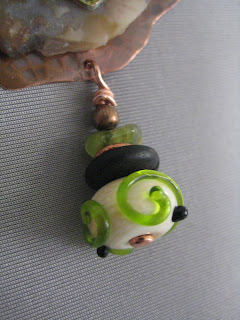 Here is the finished piece that I'd shown started in an earlier post... except I want to redo the wire connection on the dangle. The gauge of headpin I had combined with my beginner skills made for a very lopsided look. I've put it aside for a "mending" day. Do you see that little bit of copper showing between the black and the green beads? That's one of the pieces of scrap that I melted down, hammered flat, and put a hole in to create a copper disc. Again... using the garbage on my counter. 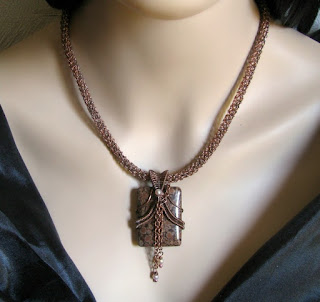 One of the pictures I found on my on-line inspirational tour was of this fabulous piece by Cat's Wire. In her story, she talks about allowing her imagination to guide her and about how she can't imagine making the same piece over and over. YES YES - I can relate. Me too! Making pieces with the garbage on my counter is a much longer journey than simply following a pattern or making a repeat item but is also far more fun and that works for me. Creating in a way that is fun is one thing I can control in my life.