On Sunday, I finished sewing the Burda 6501 bias cut top. Because it was going to - hopefully - be a wearable muslin, I chose a fabric that would be least likely to show any fitting issues. 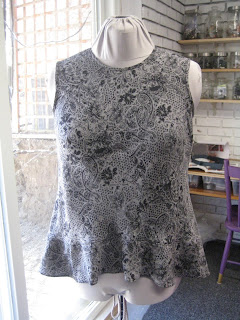 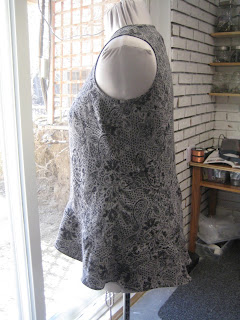 In this side view, you can see a funny bump below the armhole that resulted from extending the dart point and merging it into the existing dart. It's less noticeable when I'm wearing the top. I have since fine-tuned the pattern pieces by drafting the extended dart, adding an additional 1/2" to the front and back hipline, smoothing the line of the side seam, and lowering the neckline. I'm ready to sew it again. 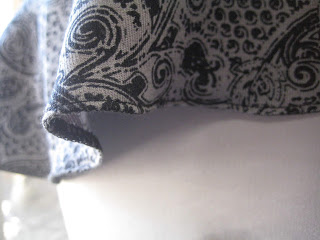 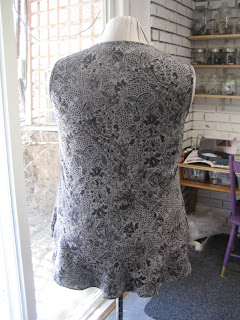 For the hem, I serged the edge and then turned under once and top stitched. This is not what the instructions called for but, as previously mentioned, it's okay to ignore the instructions when you have a technique you prefer. 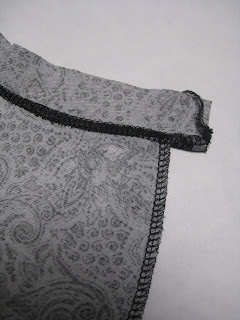 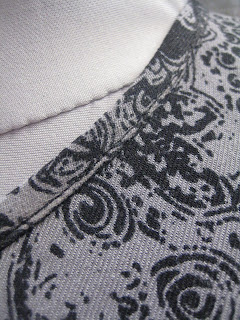 Lowering the hemline was partly about removing the seam allowance since I wrap the edge as oppose to stitch a seam and it was partly about creating a lower shape that I find more comfortable and flattering. In the last post, I illustrated how to stabilize the edge with non-stretch strips of fusible interfacing. When I stitch on the bias binding, the interfacing is caught into the stitches. The seam allowance is pressed toward the bias strip and then wrapped around to the back. It's not absolutely necessary if you don't have a serger but if you do, I like the way serging creates an even and thicker edge to press against. On the front, I top-stitch twice, once in the ditch and once along the edge. 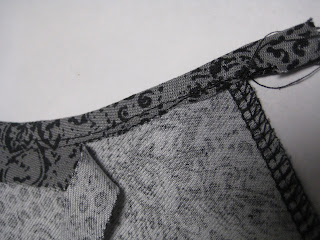 Because I stabilized the neck edge so it wouldn't stretch, there was no need to use a double needle to create stretchy stitches. I don't want this area to stretch. And, because I used bias tape to wrap the edge, I can trim close to the stitches without worry of fraying or the need for a seam finish. I've used this method several times with woven garments that are frequently washed and hung to dry and so far have not had any issues with the edge finish coming unraveled. I used the same technique for the armholes. 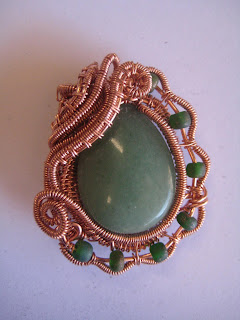 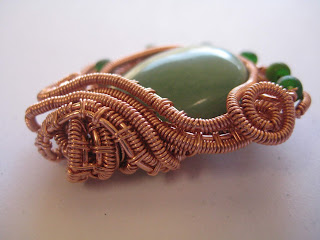 This is my latest wire wrapping, practice piece. I wanted to learn how to incorporate smaller beads with the focal bead. It still needs patina added to create more depth and visual texture and then I'm not sure what to do with it. I recently joined two Facebook wire wrapping groups so I'm going to ask what the other members have done with their practice pieces... whether they sell them... or melt them down... or cut them apart... or what do they do? 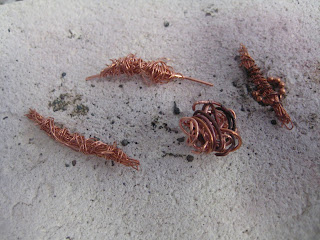 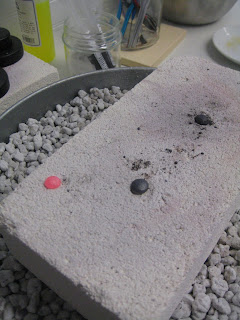 At left is the four bundles of garbage wrapped up from the bits and pieces left on my jewelry desk after the last two projects and at right are the three copper lumps they became after two of them rolled and melted together. The one is still glowing hot. For my next project, I'm going to play with ideas for using all these flattened discs in one piece. It's a fun starting point. 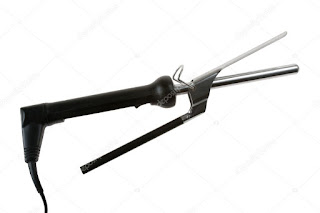 How does your hair look?Mine grows really fast and it is certainly getting longer. Before I had children, I was a hairstylist. Thirty years later, I had a chance to go back to styling only to realize that even though I'd always thought of returning to it, doing hair was no longer something I wanted to do. The profession had changed considerably. SO...

... I say that to say that I could manage to trim my hair myself if I wanted to but instead I am seeing how long I can let it grow and may possibly change styles whenever I can get to my hairstylist. To do that, I've pulled out this foreign object - a professional curling iron - and am working my way back through some old styles. Right now, it's a version of Lady Di by curling, vigorously brushing, and scrunching with hairspray. How very strange. I haven't curled my hair in at least twenty-five years.