What Do You Know?

What do you know about yourself that will help you weather this current situation more easily?

Typically, I clean house while my tenant... who is also my youngest son... is at work only he's working from home now so I cleaned Saturday morning instead. I didn't realize it was going to be that kind of clean.... the kind where I'm drastically removing visual clutter and streamlining things.

Being home alone is not new to me. I've worked out of my home studio since the early nineties and I'm comfortable with my own company. I am well stashed up and have plenty to do and didn't think I was all that stressed only this kind of clean usually happens when I'm on edge since too much visual stimulation jars my system even further. Everyone has what I call a clutter control point - before it, they can work and after it, they can't. If I start dropping things on the floor, I'm over the edge.

SO... jewelry making uses a lot of tools that are best left out and easily accessible. I prefer closed storage where I can't see everything. I'm not sure if there is such a thing as a tool garage but I may need to figure out something like that - a less visual system for my steadily growing collection.

My instructor retired after this last Creative Metal Arts workshop and sold off the copper sheeting at ridiculously low prices so an entire tubful came home with me and went under the workbench. Because I can't attend the other workshops I'd signed up for this spring, I used that money to buy tools and supplies that also went on and under the workbench. And then, I needed a stool to sit on or rest against while working for longer stretches. And sudden, tool-by-tool, supply-by-supply, the work space became visually cluttered...

... and that was irritating me every time I walked into the studio. What I know about myself is that this will make it impossible for me to work so I decided to switch the two workbenches so the white one with the dresser underneath would be viewed straight on. I'd already moved two of the overhead shelves across the room where my assembly desk is and had to shift the remaining one to accommodate hanging the motor for the flex shaft... which also irritates me... having that dangling in the air... and I'll have to come to terms with it since it has to hang.

Whichever of the previous owners framed the basement had some very strange construction habits and tended to use whatever there was. My guess is that the inside of that wall is made up of bits and scraps because it's impossible to find a continuous stud. In the spirit of not leaving the house and using what I had, I used E6000 to glue the supports to the wall - VBG. They are very firmly anchored in place now. 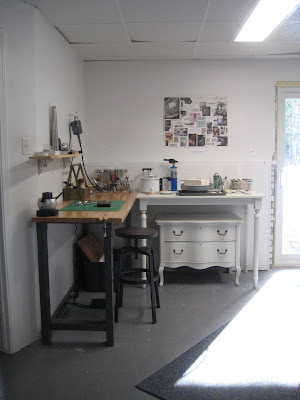 It's subtle but above is the after image and below is the before. What isn't in the picture is all the things that had begun to pile up under the wooden surface. Trust me, they were irritating. More fine tuning will happen. I am going around the house looking for storage pieces that could be moved here instead... like the end tables from the guest room. While I love glass containers, having broken a few with the heavier tools they are obviously not the best choice for this space. Perhaps wooden boxes.... Hmm... there are a few upstairs. 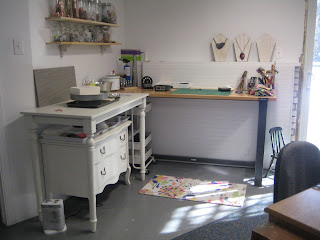 Another thing I know about myself is that I like a challenge to solve. I like putting together puzzles, finding more efficient ways to do things, organizing, and a really good question. Shortly after I moved here in 2015, while renovating the main floor, I fell head first down fourteen stairs because my sock caught on an exposed nail which was also a good thing since it prevented me from landing on my head on the cement floor below. Instead, I crashed down on the stair noses with the heaviest impact on my right hip which is now 1 1/2" larger than my left hip due to a permanent injury. It is also shaped differently which has impacted my clothing choices. Wide legged pants tend to lift up and stick out. Only, I want to sew some wide legged pants so that will be one of my challenges - to make a muslin and figure out the best place to add a wedge that will bring the hemline into level.

Some would find this tedious. My mind likes figuring out stuff like that and the challenge will keep me happily occupied for a while. In the future, this will mean cutting out the pieces individually - a right front, a right back, a left front, a left back - and that's okay because I also like patterns with a lot of individually cut pieces. Although it takes more time, there's no rush. I sew primarily for the entertainment and exploring creativity. Clothing I actually wear is a bonus. Good to know. 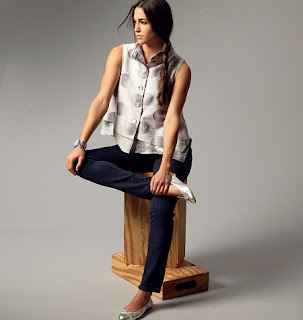 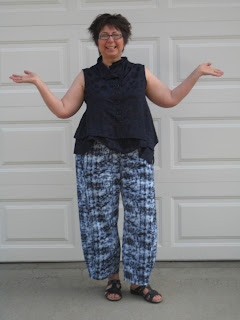 Katherine Tilton designs a lot of patterns with individual pieces. Above is out-of-print Butterick 5891 sewn in a navy linen with a running stitch in embroidery floss used as top stitching. I wore this top until it faded into oblivion so I'll definitely be replacing it some time soon. This picture was taken before the fall but this out-of-print pant pattern from The Sewing Workshop still works great because of the belled bottom. 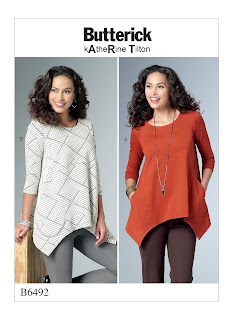 One of the t-shirt, I batch cut and sewed was Butterick 6492 using an absolutely gorgeous, incredibly soft, polyester rayon spandex blend that I love. Because I'd already tried on my friend's version of this top, I was pretty sure I was going to like it only I didn't. I do like to refashion so... 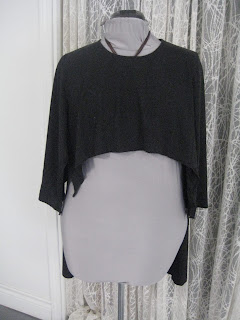 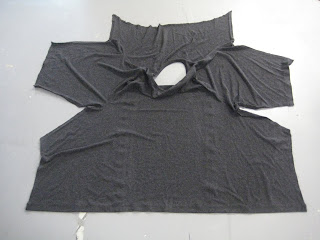 ... I opened the side and underarm seams, laid it flat, and looked at what I needed to do to evolve it into a t-shirt I could wear. The sleeves were fine. They didn't need any changes. The bias front and empire seam line made me look pregnant so I cut it the bodice off straight across where the curved seam was and added more length and then... 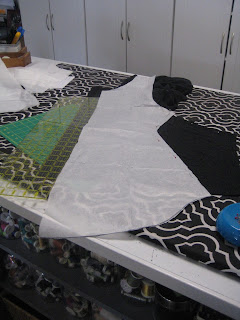 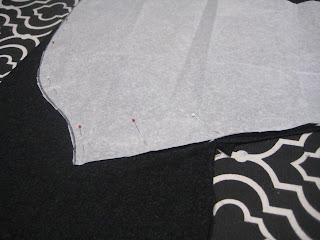 ... matched one of my T & T patterns up with the underarm seam, parallel to the center, and cut out the new side shape, repeating this on the back. I also lowered the neckline to my preferred shape and depth. Once the front and back where reshaped, the side seams were resewn, I hemmed it again, and it's been saved. It probably took longer to make these changes than it did to sew the original garment but that's okay. I've got time. I'd show you a picture of me wearing it only... 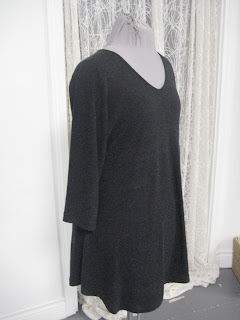 ... I'm not wearing any make-up for the next few weeks. Since I'm at home and since I've worn make-up from the age of twelve, and twelve was a long time ago, and my hair is still looking half decent even though I couldn't go to my appointment last Thursday, I've decided to go make-up-less to give my face a solid break. I'm still doing my hair so I don't scare myself silly. Later, when my hair is less than best, I'll do my make-up, again so I don't scare myself silly. Hair and make-up have always been important to me so this is a new learning curve. Thankfully, my hair has its natural colour with minimal grey so emerging roots won't scare me.

SO... to repeat my earlier question... what do you know about yourself that will help you weather this current situation more easily?

Grateful - knowing myself, being comfortable alone
at March 24, 2020

Email ThisBlogThis!Share to TwitterShare to FacebookShare to Pinterest
Labels: About Myrna, Refashioning, Studio